In my life as a development officer I hated donor-advised funds. I felt they took money from my mission, made me miss out on my goals and just made things difficult. Who were these people with their funds – and how could I find them?

As donor-advised funds have grown more popular – and I have become more familiar with them – I’ve moved from respect to real appreciation. I see donor-advised funds in an entirely new light because I better understand their important role – and potential – in charitable giving.

Money (That’s What I Want)

Waiting on a Friend

If your concern is waiting for the money, then you should know in practice donor-advised funds compare favorably with many types of charitable giving vehicles, including private foundations, charitable remainder trusts and charitable lead trusts. In fact, many donor advised funds – including The Advise Us Fund – have rules that require donors to make advisements at least annually.

When it comes to tough financial times, think of donor-advised funds as deep pockets that keep our nonprofit missions motoring. In fact, donors often give more to donor-advised funds when they have an economic windfall, like a business sale or the appreciation of financial securities. These funds gifted during the “good years” are often available to support nonprofits in good times and bad times. Because of their ease and flexibility of use, in some cases donor-advised funds are even superior to other giving techniques during tougher times.

Times are still very tough for many charities – particularly small- to medium-sized ones. And, there is no doubt that recent crises such as the Ebola epidemic in Africa highlight the need for more funding resources. Thankfully as markets have hit record highs so have gifts to donor-advised funds and – importantly – grants from them to charitable organizations in need. Regardless of the need or timing of a crisis, donor-advised funds can often serve to shore up nonprofits.

What about the “anonymous” gifting factor? At Fidelity Charitable, the largest administrator of donor-advised funds with over 63,000 donor-advised funds in 2013, greater than 9 in 10 grants included names and addresses for nonprofits to send acknowledgements.

At Vanguard Charitable, another large donor-advised fund, from 2004 – 2013 only 5% of grants were anonymous. Vanguard also found that 73% of their donor-advised fund holders report getting involved with charities they donate to beyond their financial gift.

So who are these donors? They are our donors at our charity – not Fidelity’s, or Vanguard’s, or The Advise Us Fund’s, or any other donor-advised fund administrator. As development officers we already have our donors names and addresses, and we are responsible for their cultivation and stewardship. You can succeed more by working with the donors you already know and cultivate at your nonprofit organization than worrying about those “other” donor-advised fund dollars. 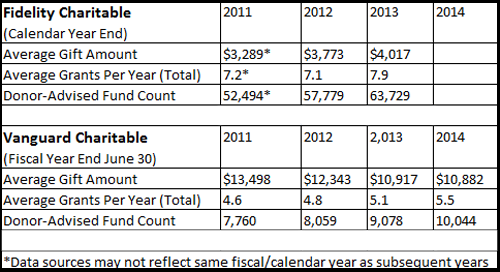 Get Beyond Just “Used to” Donor-Advised Funds

Donor-advised funds are here to stay – and that’s a good thing. With high actual payout rates compared to private foundations and other charitable vehicles, donor-advised funds have been wrongly maligned. I think that’s in part because many donor-advised funds have grants advised by mid-level “middle” donors – and “they don’t get no respect.” Major donors with major gifts are wined and dined. Small donors get constant contact with email, direct mail and modest gifts.

What about middle donors?

Middle donors making annual gifts totaling $1,000 to $10,000 represent more than a third of donor dollars – but few nonprofits have staff or resources focused on them. Yet many of these middle donors are the same demographics as people who have donor-advised funds.

Get “Great” with Donor-Advised Funds Using a Four-Step System

Step Two: Approach. Once you have found donors using (or seriously considering) donor-advised funds start recognizing them for who they are – donors that can represent a huge amount of your donor dollars. Some of these middle and major donors may not be people that you thought had the capacity and interest to offer your organization larger gifts.

Consider better ways to manage your donor relationships. For existing middle donor relationships, if you don’t already have an approach for them, develop one. Approach newly “re-discovered” donors capable of moving to middle and major donor levels to develop appropriate, stronger and more beneficial relationships with them.

Step Three: Funding. Cultivate your prospects, steward your donors and know that when the right donor meets the right cause, there may be money waiting for just that moment. A major benefit of donor-advised funds is that they can offer charitable giving resiliency even in a poor economic climate. Whatever money is in a donor-advised fund is dedicated to charity – and your relationship can make a difference.

Offer programs that encourage using donor-advised funds to schedule regular donations at critical funding junctures for your nonprofit. These programs can mean a substantial funding boost just when your charity needs it most!

Rosalyn Lambert serves as Charitable Catalyst, Donor Services, at The Advise Us Fund. She first experienced philanthropy as a 5th grade volunteer at the Red Cross, and later would work as General Manger, Financial Development at the Red Cross. An independent fundraising consultant, Roz has worked as a Senior Development Officer in Pediatrics at the University of Chicago; Manager of Major Gifts, Lutheran General Hospital, at the Advocate Charitable Foundation; and worked as Assistant Director of Corporate Relations at the Chicago Zoological Society. Roz holds a B.A. in Philanthropy and Fundraising at Indiana University Bloomington.

The information in this blog post is general and educational. It is not intended nor should it be construed as legal, tax, investing or financial advice. Individuals should consult with their own advisor about charitable giving arrangements The Advise Us Fund® may describe.